Back To Previous Page | Print This Chapter

Performing Liposuction On Your Raw Material 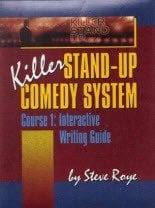 As I have shown you, producing raw material for a stand-up bit is relatively easy given a method to do so. Tightening the material and making it as funny as possible before you hit the stage is just a bit more challenging.

Please keep the following in mind before we jump into the next techniques for sharpening your material:

• What you do on paper is merely a tool for editing whatever you want to say on stage.

Advanced development of stand-up comedy material occurs as a result of what happens on a stage in front of an audience and in the subsequent evaluation and revision of your material as needed.

This is discussed in detail in the Interactive Performing Guide.

• Until it is as tight as it can be and you are getting the level of laughter you want, your stand-up material should continue to evolve.

Removing The Fat From Raw Material

The first part of the editing process involves the removal of “fat” (i.e., unnecessary words and lines). By “unnecessary,” I mean that they add little or no value to what you have to say. Ideally, you want to say the minimum number of words possible before you get to the punchlines.

You should also try to change or remove any words that you repeat unnecessarily. Of course, there are times when repetition of a particular word or words is necessary to keep the meaning of the bit intact. But often we tend to say the same word over and over without needing to.

While I do repeat words in my bits, I try my best not to use the same word for the same bit over and over again if possible. The same applies to my entire act. Sometimes this is simply unavoidable. An example of this is the callback, which I will discuss later. Even if you callback a particular word or phrase in your bit or act, it is done with purpose and meaning, not just for the sake of repetition.

Even though words alone may represent only a small part of your act as a whole (about 7%), they do have value; they are the basic building blocks of your act. Using the same word over and over, line after line in a bit can potentially diminish the impact of the word itself. This is especially true when using profanity.

If every line you have to say ends with “fuck” or “shit,” you rapidly diminish the impact of these very high impact words, as opposed to when they are used sparingly.

By using different words to describe the same thing (if you can), it will help give your bits a better descriptive and visual picture in the minds of the audience.

Removing unnecessary words and lines, as well as eliminating repeat words, is something you should continue to do throughout the development of your material. This will greatly help you to develop the tightest act possible.

I thought it might be useful to give you an example of some completely finished material that I do on stage. I provide this example to give you a feel for where you want to ultimately end up with regards to brevity.

Below is part of one of my chunks, using the single-line format and applying the rules I have described.

The text from the clip is as follows:

S: Last year for the first time I tried out for a TV commercial.
S: It didn’t pan out.
S: They called me in for the interview
S: And I told ‘um right up front that I had never been
P: A hemorrhoid sufferer
T: But I could learn
S: And then I tried out for this movie
S: And I went in for the reading
S: I didn’t know it was a skydiving flick
S: So the first question out of the woman’s mouth was
S: Can you jump out of an airplane?
P: I said yeah..with some medication
T: And an adult diaper
T: And it better be designed for maximum load too

I have taken the raw material I started and I’ve removed some unnecessary words and lines (using text so you can see the process — additional changes are in bold):

There are some important things to note in what I have done in this initial editing:

• I removed unnecessary words and lines that added no value to what I wanted to say.

• I removed some lines that I didn’t think would fit in the overall chunk itself. This was completely subjective on my part. I wasn’t moved to expand or rewrite what I had written in those particular areas, so I just got rid of the lines.

• I changed some words (mostly verbs) in order to make the sentence complete or sound right.

• I added some words after I deleted others in order to make the sentence sound right.

REMOVE SOME FAT FROM YOUR MATERIAL

At this point, you should have your raw material in single-line format with the initial set-up lines, punchlines, and tag lines identified.

1. Take out any unnecessary words, lines, and repeated words from your raw material. Make the lines as short as possible without it sounding like you have a speech impediment.

2. Say the lines out loud after you have deleted words to make sure they sound like you would say them as if you were talking to a friend. This is an extremely important step, and I cannot emphasize it enough.

The next step in the editing process is to see if there are any sentences that can be rewritten to say the same thing with fewer words. Keep in mind that this is an initial rewrite. Lines may need to be rewritten later if they don’t sound the way you would really say them.

One way to easily identify lines that may need to be rewritten is to look at their length. If a single sentence wraps onto another line, then it should be automatically considered for a rewrite. But it doesn’t necessarily mean you have to rewrite it. Later, we will look at breaking long sentences up into separate lines.

Hopefully you can see the advantage of starting with a large quantity of bulk material. It expands your options in the process of forming your finished bit.

Let’s take a look at what material we have left after this initial, basic editing process:

This material started out at 393 words. It is now at 257 words, resulting in a 34% reduction in size. Think of it this way: The time that was previously taken up by those unnecessary words can now be replaced by other material of mine that gets laughter. Why waste time on stage with material that doesn’t result in laughter?

The material in this bit is tighter, but there are still plenty of improvements that can be made with advanced editing.

REWRITE LINES IN YOUR MATERIAL

1. Rewrite (if possible or if needed) any lines you couldn’t seem to shorten by deleting unnecessary words.

Remember that there is more than one way to say the same thing. Don’t worry about adding lines or trying to expand the material any more at this point.

2. Check the label (S, P, T) of each line for changes as a result of your word and/or line removal edits. Set-ups may become punchlines, punchlines may become set-ups, etc. You will want to revise the line labels as needed throughout the editing process.

3. After you have edited your material, say it out loud. See if it still sounds the way you would talk to a friend. Again, this is critical. How you would say it is far more important than how it is written on the paper.

And remember, when you are editing, write the lines as closely as possible to how you actually talk.

Hopefully, your bit is starting to take shape at this point — and we haven’t even tried to write one punchline yet. This might be surprising to you, considering the fact that most people consider the punchline to be the most important part of a comedy bit. But I’m about to tell you something that may sound absolutely crazy to you…

The punchline is not the most important part of a comedy bit.

You’ve got to be kidding! So what is the most important part? Well, you might be very surprised by the answer.

It’s what we’ll be talking about next…